Video bloggers eat on webcam and gather millions of views 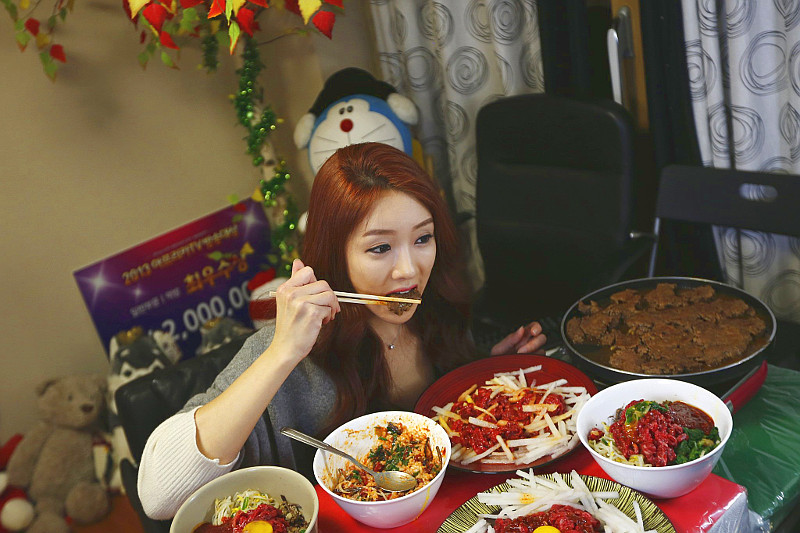 The trend to have online lunch was set in South Korea. The phenomenon was named “mukbang”.

Having lots of dishes on their tables mukbang stars are eating their meals online several hours a day. At the same time they are answering questions in chats and sharing their opinions on how the dish tastes.

Afreeca TV is the most famous stream service for mukbang. It allows viewers to transfer small amounts of money to a favorite blogger. The most popular characters make thousands of dollars a month thanks to their ability to eat properly.

The majority of Korean mukbang stars are attractive girls. Take for example Park Seo-yeon aka Diva. This fragile girl works as a real estate consultant during the day and then eats a great amount of food online in the evening. The unexplainable gluttony brought her 130 mln views on Afreeca TV. Every month her fans donate $9000.

Another food video blogger is a teenager Patoo. He is one of a kind because he won viewers’ hearts thanks to his funny manner of eating, champing and squinting at spicy kimchi.

Despite a great number of food almost nobody among bloggers is overweight. A famous Korean eater Banzz claims that in order to keep fit he spends 6-10 hours training.

Of course, only those who make living by eating online can afford it. Thanks to mukbang Banzz receives around $3000 a month.

Mukbang is gradually coming to the West. Stream service Twitch has a special section for it on the website. Europeans and Americans see mukbang as a means of conveying ideas of healthy nutrition and veganism. For instance, Darren and Georgie Spindler made around 800 streams with eating plant food – they were viewed by 4.6 mln people.

Bloggers and mukbang fans have been discussing reasons of it for a long time. Diva believes that a lot of her viewers want to eat tasty food in large amounts themselves but can’t – because of medical conditions or diets.

Others think that mukbang helps viewers to cope with a feeling of loneliness. Communication with friends is replaced by broadcasts. If it’s true, the rise of mukbang in South Korea is no coincidence: every fourth person here lives alone.